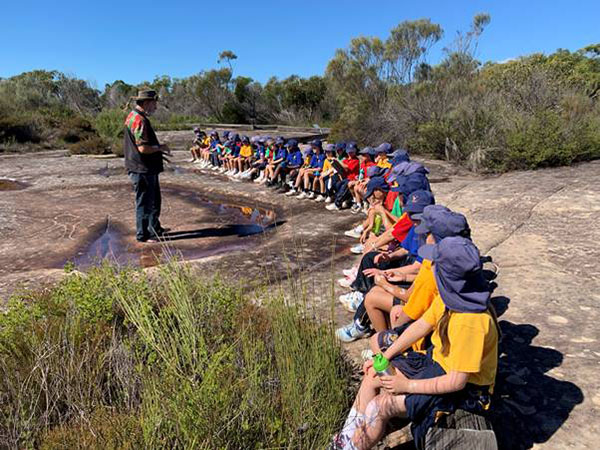 On Wednesday, 3rd Grade went to Kuring-Gai National Park to get some fantastic facts about Aboriginal Culture. By Kristof

A short time after we arrived and started our walk, the first thing I saw was a fox trapping sign. I was sad because foxes are my favourite animals. By Mikayla

At the National Park we walked through a wet bush track that looked like a desert. Laurie was guiding us then we watched him make some ochre. Since we had ochre, we painted ourselves. Meanwhile, other people were making red or brown coloured ochre. By Aaron

We learned about cold fire and hot fire. Our guide Laurie was making ochre (which is a kind of paint that was made of stone). Then he gave some ochre to our teacher. She painted everybody on the cheeks, arms and legs.  By Jeffrey

Laurie showed us how to spit ochre on walls and warned us not to step on carvings. By Miller

After that we walked back where we met Laurie to eat our morning tea. Everyone sat near Laurie since he had so many cool Aboriginal instruments and tools. By Clara

We ate lunch and then Laurie showed us Aboriginal tools like boomerangs, clapping sticks and rain sticks. By Sarah

We had a bush walk. We saw bush turkeys. I had a good day. By Holly

Laurie showed us the men’s place, the women’s place and the marketplace. He told us that the carvings showed us punishments, animals, where animals live and if food is ready for you. He also never stepped on the carvings because it was disrespectful and they would wear away very quickly. By Sebastian

We painted ourselves with ochre. Our guide, Laurie said that ochre makes you feel more connected to the land. By Amelia 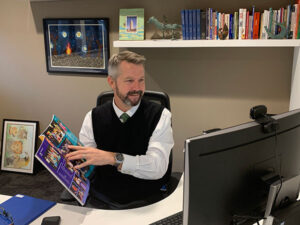