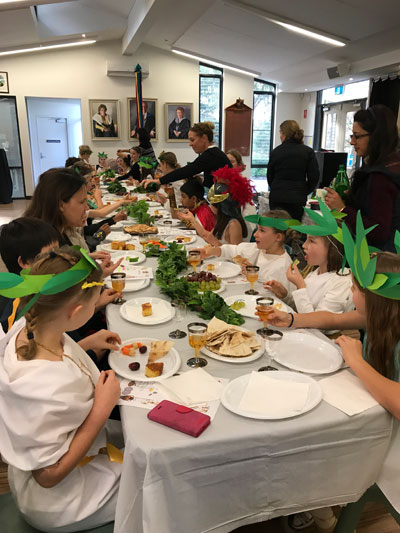 “We got to create an island of our own, make rooster shields in art, read the wanderings of Odysseus, imagine a Greek god fact sheet and particularly… Greek Day!” Josephine

“I loved Greek day with the dressing up and the big feast at recess, also the chariot racing, long jump, discus and the marathon race in our Olympics…” – Cassie

“…The Greek food, I also liked doing the debate, which is better, the Athenians or the Spartans? We also watched Horrible Histories, The Wife Swap. It was so funny!” Tahlia

“I liked the Greek gods project and dressing up for Greek Day. I have loved studying Ancient Greece!” Celia

“…I was also very fond of the debate between the Athenians and the Spartans. Of course I was in the Spartan team and I got a little too fired up and insulted the Athenians. It was really fun and I recommend other children study Ancient Greece…” Katia C

“Even though I was not able to participate in the Greek Day Olympics because of an injury, I still enjoyed helping with discus. I measured the length people threw and let the teacher know…” Heidi

“I particularly liked creating an island of our own, drawing a Cyclops comic and a Minotaur maze…” Marlon

“The Olympic Games! We were divided into four groups: Olympians (Macquarie House), Trojans (Phillip), Athenians (Cook) and Spartans (Flinders). I was an Olympian. Most of all, I loved dressing up as Aphrodite, Goddess of Love and Beauty. I wish we could do it again!” Victoria

“I particularly liked learning about the battles with cities like Sparta and the Persians. I was also very happy with the Cyclops Polyphemus comics we did, they were really fun…” Oliver

“Making our own paper Greek vases, learning about the Pythagorean Theorem, making the imaginary island, the Minotaur maze…” Ariel

“I loved the fact sheet I did on Hestia and I learnt so many new things. Although Greek Day had quite a few mishaps it was still amazing and the morning tea was scrumptious…” Sophie

“What I loved about Ancient Greece is reading the wanderings of Odysseus. The part I really liked about the book was when clever Odysseus and his men tricked the Trojans with the Trojan horse. I was also extremely terrified when they blinded the Cyclops…” Benjamin. 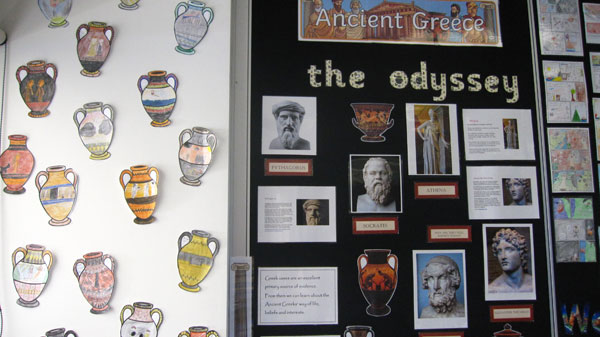