On Wednesday 150 children, organised in  50 teams of 3, from 9 schools played at Mona Vale Public School in the Northern Beaches Chess Teams Challenge.  Mona Vale our hosts, are an OC school with a very strong Chess Club and the Northern Beaches Schools are historically very competitive when compared across Sydney.  John Colet took 8 teams, a Senior Girls team and an Intermediate Girls Team, a Junior (K-3) team and 5 Boys teams drawn from Intermediate and Senior Classes.  All of the children played 7 Chess matches.  Eight students had never represented John Colet before for Chess, so it was a steep learning curve, with all of them reporting having had a marvellous day!  I am extremely grateful the the parents who assisted with transport and supervision during the day, especially given that it was bucketing down with rain when we arrived in Mona Vale and all best efforts had to be made to try to get the children into the hall, as dry as possible, so thanks Katrina P, Chetana H, Gaya G as well as Indu B and Helen H. 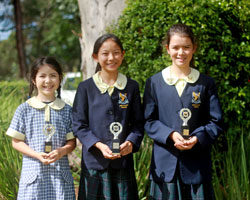 Our Senior Girls Captained by Mi Mi P and supported by Amelia G and her sister Isabella G took out the “Best Girls Team” Trophy. When Mimi was presented with her Trophy on stage Richard Gastineau-Hills of the NSW Junior Chess League noted that she had indeed not lost any matches during the tournament. This is the 2nd year in a row that Mimi and Amelia have been members of the winning team! 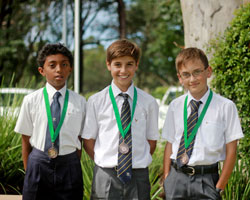 Our John Colet B Team were drawn from our Senior Class and Captained by Leo G (6R) on Board 1 and supported by Kai P (6C) and Ramakrishna B from 4th Class. They were awarded Medals for coming 5th overall on 14 points.  Notably Kai won 6 out of his 7 matches and his only defeat came at the hands of a child with a rating over 500. Fernando Caro Vines our Senior Chess Coach from the Sydney Academy of Chess, had given input into the make up of the teams and had strongly recommended that Leo take a Board 1 position, and while Leo had a few moments yesterday where he wished he were on a Board 2 or 3, the results for the team speak for themselves!

Our John Colet D Team Captained by Sean G (6R) and supported by our Head Boy Callum H (6R) and Edward T from 4th Class came in 9th place only 1/2 a point behind our B Team, which was an amazing result, especially as Callum and Edward were playing in their first tournament.  Both Sean and Callum only lost one match each!

Our John Colet C Team Captained by Jason N (6R) and supported by Paul D (6R) and Eshaan H from 4th class came in 11th place only 1/2 a point behind the D team.  This was Jason’s first Tournament and he was a bit daunted by the additional duties of the Captain as well as playing Board 1 but he handled it beautifully, with lots of smiles and maybe even a little bit of “happy dancing .

Our John Colet A Team Captained by Daniel S (6R) and supported by Thomas J (5T) and Saurav H from 4th class came in 15th place only 1 point behind the C team.  They were a bit unlucky with their Draw, having to play several teams with Chess Clocks as their opponents had ratings over 400.  What I know from being at several of these tournaments now, is that the luck of the draw can play a big part in the final result. I was very proud of their very sportsmen like behaviour and the way they supported the other John Colet teams on the day.

Our John Colet E Team Captained by Kai C (5T) and supported by Aidan H (5T) and Rory M (6R) enjoyed themselves and gained valuable experience for future competitions and earning 10 points.  Kai and Rory are in our Intermediate class and this was their first time representing the school.  I look forward to seeing them progress at further at future tournaments.

Our John Colet Juniors Captained by Leo P (3rd Class), supported by Siddhartha B (2nd Class) and Heidi P (3rd class), had a pretty difficult draw.  Neither Leo or Heidi had been to this tournament before, while Siddhartha had been a part of the winning team the year before. They were only 1.5 points away from the winners of this Division and Siddhartha deserves special mention for winning 5 of his 7 matches.

Our Intermediate Girls team Captained by Scarlett (6C) supported by Bethany T and Misha Y from 4th class, showed fabulous grit and determination.  This was Bethany and Misha’s first time representing the school.  Misha could not wipe the smile off her face after winning or drawing 4 of her 7 matches.

We have a further Interschool Chess Challenge coming up this term on 6 April at Curl Curl North and next Term on Fridays after school, we will participate and host (every 2nd week) the Primary Schools Chess Teams Competition, with 4 teams of 4 chess players across 4 levels of Chess, from Championship through to Rookies (dependant on parent volunteers).

The Club has had a fantastic take up this year with over 70 members attending 4 classes every week. We are very fortunate this year to have a strong Year 6 group as well a good size enrolment of enthusiastic children in Years 4, 3 and lower 1st.  I would love to encourage our Year 5’s to consider joining the club.  They would be welcome to commence in our Monday afternoon Intermediate Class from 3-4pm.  If you have any questions please do not hesitate to contact me.

If any JCS parent would like to keep up to date with our Chess Club we have a Closed Facebook Group called “John Colet Chess Club” that you may request to become a member of.  I try to put updates of what happens in the classes, as well as links and resources to assist with your little Chess Champions, photos from our tournaments and Chess Quotes and “Fun Facts .