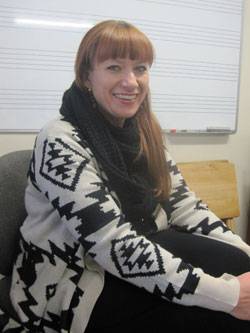 She is about to submit her thesis for her Master of Music, titled Consonant Agendas: the priorities of conductors and student members of vocal ensembles in Sydney Anglican schools. Put very simply, she researched what conductors and students want from their singing, and how well they communicate that to each other.

In this 4 year part time effort, Mrs Miles did in-depth interviews and research with 5 conductors and a core group of twenty students from a range of schools. Her main finding – which she has been invited to present at a Research in Music Education conference in the UK in April she says will surprise many in music education.

If conductors could spend the time to find out what students wanted to sing, they would be surprised, because it’s not what they assume.

My research findings show students do want to learn a more traditional, classical repertoire, and that teachers mistakenly think their students will be motivated by singing popular songs, say from Frozen .

Now although classical choral music is not necessarily something students will have heard at home or on the radio, they do have an intelligence about it and an innate desire to sing it. Unfortunately, like many aspects of society, there is a trend toward juvenilising or dumbing down of music. This has been partly caused by the influence of the media, but also as a result of the misconception of conductors to choose repertoire they think the students want to learn rather than listening to what the students really want.

Choral music is written specifically for voices, it requires a level of choral artistry that you won t necessarily get from popular music. On the whole, popular music is not well arranged for young people’s voices.

I m thinking of the absolute buzz that goes through the JCS choir when they’ve sung Handel’s Hallelujah Chorus. It’s electric with excitement; you can see and feel the joy they get from it. Singing something that’s really well written, it just feels good to do it.

So if I choose something more popular, such as Mambo Italiano , the choice is based on the actual quality of the writing and arrangement. I do spend hours at the computer comparing scores and arrangements, deciding which will best suit our choirs.

Mrs Miles is also passionate about the benefits of singing in parts. She says it’s unusual for a primary school choir to sing in parts and harmonies to the extent that we do, and it too brings a special quality through the combining frequencies and harmonies.

Although not part of her research ambit, Mrs Miles says the brain benefits of classical music and singing are well documented.

Mrs Miles is now selecting songs for the rest of the year’s choir performances. Mozart for Mr Mane’s farewell, something fun (but well arranged!) for Open Day, and of course the Ryde Eisteddfod and at least one other, and Speech Night in December.

Mrs Miles lives near Windsor, in the house she grew up in, with her husband and family of two boys and a girl, aged 7, 5 and 3. Her parents also live with them, as her grandparents lived with her when she grew up. She loves gardening with her daughter and mother who maintains a very big garden and vegie patch and likes to bake. Her next challenge will be her PhD – It will be something to do with choirs, that’s my passion! 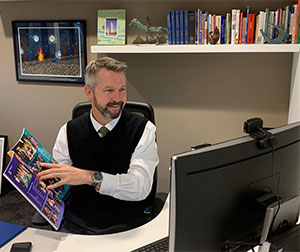