A career rich in music, language and sport Jenyne Hanson" 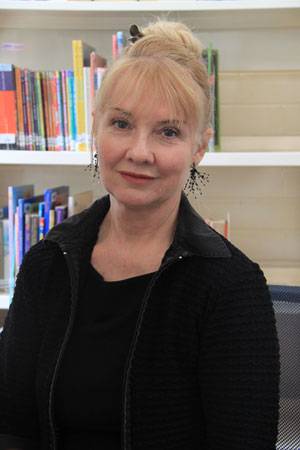 Luck, both good and not so good, has played a hand in the remarkable career-to-date of our librarian Jenyne Hanson.

Ms Hanson has a BA from the University of New England, majoring in French with accompanying studies in Music, German and Theatre Studies. She is also a qualified Naturopath, Herbalist, Remedial Therapist and teacher of English as a Second Language.

During the rest of the week, she is the Audio-Visual Archivist at Opera Australia, where she also sometimes works as a copyist and surtitles operator, the latter of which involves following a music score, conductor, and singers whilst operating the translated computer slides during their performances.

She began working at John Colet School when she enrolled her son Wynford, 15 years ago. At that time Ms Hanson had her own Naturopathic practice, but as she was travelling to school each day from Balmain with young Wynford, she spent much of the week volunteering here. Mr Mane then offered her a librarian position two days a week.

So it’s a rich and varied portfolio career, and as she says, her story is about making the most of opportunities as they come along &

One thing you may not know about Ms Hanson is that she was an Australian National level competitor in Fencing.

She had her first lesson in her early 20s in Belgium at their National Salle and rose relatively quickly through the ranks back in Australia from Novice to National level – having a quick eye and excellent reflexes, she was then asked to score Finals events at World Championship level. She was studying Naturopathy, Botanic Medicine & Remedial Therapies while she was competing in Fencing competitions, so she then became the masseuse for some of the competitors in the Australian Fencing Team.

However, in 1980, while on the way to a national Fencing tournament, a serious car accident left Ms Hanson paralysed with a broken neck. As she describes that time, it was only through tenacity, hard work and good luck that she was able to walk again, although the accident has left her with some residual damage that she constantly works at repairing to maintain movement and good health.

It was while she was recovering that she completed her naturopathic studies and got back to work in the music industry, toggling between music and naturopathy to earn a living. She has written music for film, TV documentaries and advertising, composing on a Fairlight Music Computer (a digital sampling synthesizer designed and developed here in Sydney) which she eventually housed in a little studio of her own. (Her brother also had a sound recording studio in Ultimo, where she started out with this part of her career).

Later in the 80s, this work morphed into her being the Marketing Coordinator for Fairlight (Electric Sound and Picture) where she met many of the Fairlight owners of the time, including Peter Gabriel, artists of Duran Duran & Kate Bush.

Another great opportunity followed when she was invited to take her Fairlight to Sarm East (Trevor Horn) studio in London (now the London Recording Studio) and to Mountain Recording Studio in Montreux, Switzerland, owned by the rock band Queen. But that is another story &

Along the way, Mrs Hanson has played in a number of orchestras (pre-accident she was a competent pianist, French Horn player and ballet dancer). She was a founding member of the Sydney Chamber Choir while studying music at Sydney University. For some years during the nineties she was conductor of a Community Choir in Balmain known as Stephen Vincent performing their concert repertoire and singing at charity & community events around Sydney. As an actor she has played with the Hunters Hill Dramatic Club as Dorine in MoliËre’s Tartuffe , and done some acting in films & television series.

And why did she choose John Colet School for Wynford 15 years ago?

I d watched the TV documentary series 7 Up and it seemed to make clear that the effort you put into the first years of a child’s life pay off significantly in their adult life. So I was prepared to travel for just the right primary school.

Now Wynford is embarking on a life path that promises to be just as interesting and varied as his mother’s.

On the Vegetarian lunch menu for Week 10