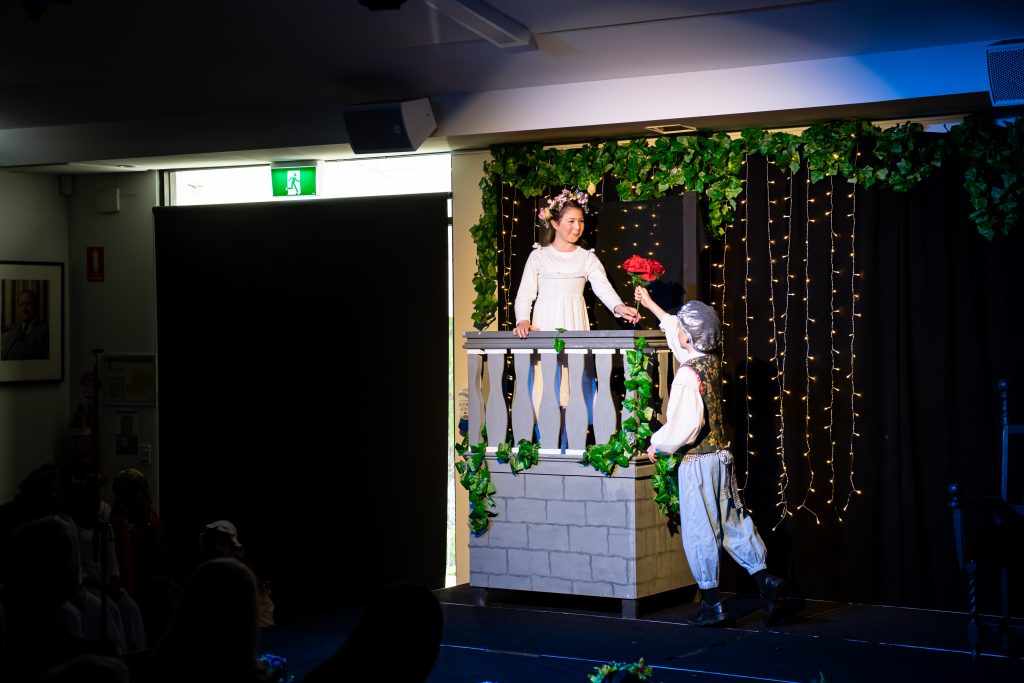 “Boldness be my friend.” – William Shakespeare.

It’s a bold move to incorporate Shakespeare into a primary school curriculum, but at John Colet School (JCS) it’s one of their most popular learning initiatives.

Students start being exposed to and learning about Shakespeare from their very first year at JCS, culminating in a Shakespeare Festival at each year level, where every child plays a part.

Headmaster Julian Wilcock said even the most shy and timid students end up loving their drama lessons and being involved in the productions.

“Learning about Shakespeare and immersing themselves in that world is something that extends and excites students. We’re giving them access to the stage from a young age, so they don’t have to wait until they reach high school,” said Mr Wilcock.

“The children often tell me it’s their favourite part of school. They have enormous fun and as soon as their Shakespeare Festival finishes they are asking what play they will be doing next time!”

Local drama teacher and director of Brightsparks Performing Arts School, Zoe Emanuel, said the best part of her job is witnessing the students overcome their nerves and fears, and seeing their little faces light up during show time.

“Teamwork and cooperation are an important part of putting on a play. The children learn they can rely on each other and form a trust which allows them freedom to be themselves on stage,” said Ms Emanuel.

“The rehearsals and performances teach them courage, resilience in the face of disappointment, patience, being able to work independently, humility and how to accept praise and much more.”

In addition to exposure to ‘real life’ theatre practices and production techniques, students build strong relationships with other children and learn to encourage and rely on each other.
This is cemented by the fact that students stay with the same peers in the same class for a number of years, which helps to take away some of the pressure or nervousness of performing with unfamiliar people.

“Our experience at John Colet School is that drama has been a mode of learning that challenges and supports students to make meaning of the world around them, giving them critical tools to help express their ideas and their interpretations, in art form,” said Mr Wilcock.

Improving mental health and increasing the students’ confidence is also a big driving force behind such focus on the Arts at JCS. A recent Harvard study found that creative activities like the Arts can relieve stress, aid communication skills, and help prevent future cognitive decline.

A sentiment echoed by parents within the school community, who believe a strong foundation in the Arts has been crucial to their child’s holistic development.

“Having my 5 year old boy reciting Shakespeare and talking to me about Starry Night. The peace of mind knowing that my kids are having their serve of vegetables for the day. The close relationship with a dedicated teacher, the nurturing and loving environment. Those are some of the reasons that my husband and I believe there is nothing like John Colet School anywhere in Australia,” said Mariana P.

John Colet School offers an extensive Arts curriculum in addition to participation in Shakespeare, where children learn philosophy, Sanskrit, take specialised art classes like ceramics, and learn musical notation during class time. But it’s what they learn and experience in theatre that excites most.

“We believe that primary education is just that – primary. It’s foundational to a person’s development, and it begins when they are children,” says Mr Wilcock.

“We challenge our students to extend themselves beyond the status quo, by providing an enriching and deeper learning experience. Students have the opportunity to take part in our extension curriculum, which includes learning Latin, French, and specialist subjects like piano and joining the Chess Club.”

The best feedback the school consistently receives from graduating parents is that their children are confident, independent, self-aware of their strengths, and that they’re academically ready for high school.

If you would like to arrange a tour or appointment, please contact us here, or email us at registrar@johncolet.nsw.edu.au