On Wednesday this week, the Chess Club took 20 of its members to Curl Curl North Public School to represent John Colet in the Heats of the Interschool Chess Challenge. Eight Schools participated with about 90 students from Mosman Sacred Heart, St Ives Public, Narrabeen North, Curl Curl, Oxford Falls Grammar, Mona Vale Public School and Newport Public School.  This is historically a very tough compeition for us and one in which we have not been too successful.  On this occasion there were 28 participants who had official Chess Ratings over 400 and the top 4 rated players came from 4 different schools.

All of the children played 7 matches of Chess.  The children were very sporting and very supportive of one another (and enjoyed access to the School’s canteen expecially for popcorn and ice blocks).  Four children represented us from our Intermediate Class from 2nd to 4th class, and the remaining 16 from our Senior Class from years 4-6.

This tournament is quite different to the last one we participated in at Mona Vale which was a team event.  In this one the children competed as individuals and all matches used Chess Clocks.  For Bethany T, Edward T, Siddhartha B, Elston C, Kai C, Ryan M and Callum H, this was their first tournament of this nature.  In a compeition such as this it can be quite frustrating to find the ‘Draw’ pitting JCS’er against JCS’er which is unavoidable but limits our possible points.  I saw many examples of the chlildren displaying the John Colet values, being very respectful of their opponents and even debriefing them on the tactics that had been used in their matches.

As the end of the tournament drew near the excitement built and all of the children were very excited to monitor our progress.  At stake was the opportunity for John Colet School to progress through to the Semi-Finals of the Interschool Chess Challenge (a feat that we managed last year), which will be held in August.  In order to do so we needed the scores of our top 4 performers to be added up and compared to the top 4 performers of the other schools and to come in the top three.  We had very stiff competition from Mona Vale Public School – with their OC stream and large Chess Club, and also from Newport which had two of the highest rated players in the competition and Oxford Falls Grammar – who beat us last year.  The Tournament Director Bevan (whom many of the children have met at our School Competitions last year or at previous tournaments) was tracking the progress scores at the end of the rounds.  At the end of the 5th round we were coming 1st by just half of a point (a draw/stalemate) and 2nd and 3rd place were tied on the same points.  The 6th round saw 2 wins and 2 losses from our top 4 (Daniel, Mimi, Ramakrishna and Leo G) which put us under pressure for our final round, thankfully our whole team lifted under the pressure, winning 14.5pts/20 and all of our top scorers won their matches.

Overall placegetters were first presented with Ramakrishna B coming 7th on 5.5pts, Mimi P (our Head Girl) coming 4th on 6 points and Daniel coming 3rd on 6 points.  Players on the same score are differentiated by the strength of the opponents that they triumphed over.  Then the Schools announcements were made with Mona Vale coming 3rd on 21 pts, John Colet School coming 2nd on 22.5pts and Newport coming 1st on 23pts.

All of the players will receive a Participation Certificate, which has the link to the Sydney Academy of Chess’ Results page.

Special Thanks to our Drivers Indu B, Sarah McW, Chetana H and Katrina P. Without Parent volunteers the Club could not function. 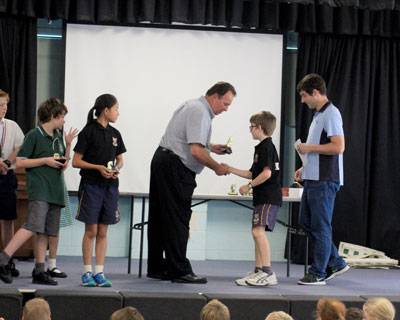 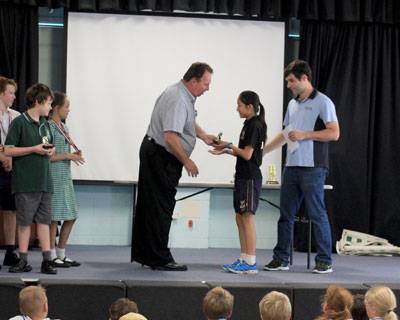 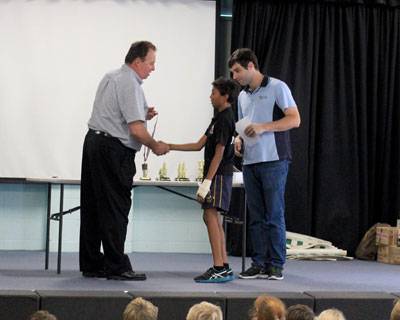