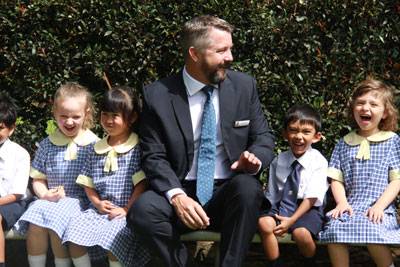 How lovely to see the children returning so happily to school on Wednesday most of them a great deal taller than when they left at the end of Term 4 last year.  Also a warm welcome to the many new children at John Colet.

The new Head of School, Mr. Julian Wilcock, made himself known to the students at Assembly on the first morning.  The new Head Boy and Head Girl were in place and read the weekly Psalm beautifully, and the recorder children (Year 5 now!) played in their usual melodious fashion during and after the Assembly.  It all bodes well for a great year.

Mr. Wilcock has been much in evidence around the School, getting to know the parents and children, and even braved the new Lower First children during their first Recess accompanied by a photographer from the Manly Daily.

Please note that teachers are not in a position to answer emails during the day.  Please allow them overnight to deal with matters.  If it is something urgent such as a late change in transport home, please speak to the Receptionist and ask her to convey the message to the teacher.

At John Colet we have quite a few before and after school Clubs. (Language-French and Mandarin, Chess, Yoga, Gardening, Chanting, Sailing, Science, Art, Sewing,  String  Ensemble, Dance).   We will be instituting  a Club Contract for the children to show you to sign and return.  This is a contract with behaviour guidelines.  They will be self-explanatory, and will be issued once membership of the Clubs is confirmed.  More anon.

Children and Staff are working on Respect, and for the children it is respect towards their teachers.  They know the ropes Mrs. McKendrick asked at Assembly for suggestions as to how that respect could be shown.  They came up with

These could well be taken into the home too!