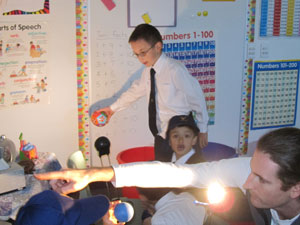 Our lunchtime science club aims to give our younger children an extra insight into what Science is and to encourage the children to think scientifically: questioning the world around them and either experimentally verifying things for themselves, or understanding the work of other scientists. In each session the children are introduced to some heroes (or heroines) of science, are shown some science in action, and get to do some experimental investigations of their own.

– Do we see with our eyes or something else? (Observing what we “saw” when we covered our eyes);

– Do our eyes stop working when we close them? (Shining a torch onto closed eyes).

Two great scientists in the theory of vision were introduced:

– Ptolemy (Greek, c. AD100) thought light came out of our eyes to illuminate the world around us;

– Alhazen (Persian, c. AD1000) thought light entered our eyes after it came from other sources and illuminated objects.

We tested these ideas by covering our eyes and observing whether we could see our hands. The students heard that a good scientist must be gracious, in that they must be prepared to be proved wrong.

The children did two hands-on investigations:

– Casting a ball’s shadow onto a screen, observing how the shadow moved and changed shape as the ball moved;

– Putting clear acrylic blocks (rectangular, convex and concave prisms) in the path of a ray, observing how the path of the ray was diverted.

The aim is for children to start to deduce that light travels in straight lines, and that light bends as it encounters transparent objects at an angle.

Finally we performed a simple trick using these two laws by placing a coin under a glass and making the coin disappear, when observed from the side, by filling the glass with water.