Walkathon Update
So far $7,514 has been raised and 73% of children have made donations. Katrina B reminded the committee to think clearly about communication for the event as target setting misrepresented the event to the school community. Cherry was thanked for her excellent efforts. Class parents are asked to send out final friendly reminder for any pledges outstanding.

Open Day
–       Fair/Stalls Update By Liz K
Liz K advised that all rosters have been given to class parents and the website is up to date. Liz K asked that class parents contact her with any other questions as soon as possible.
Judith D advised that the small broken down shed at the back of the school is to be removed, making the environs tidier.
Balloons will be made available for the Art Show opening night as well as for fair.
The stage will be set up Monday before event. Three additional gas ovens were offered to the food stall operators, which they have kindly accepted.
Liz K will be roving about on Fair Day to answer any issues raised.
Alex C will put John Colet aprons out for each stall usually about six per stall.
Liz K will send a PDF file (advertisement for fair and art show) to class parents, to send on to all parents so they can forward it onto family and friends.
This year the John Colet Fair does not clash with the Kamaroi School fair.
Liz K advised that a map has been put together, outlining placement of stalls on Fair Day. Alex C suggested that these maps be placed at the Board of Governor’s stall, at the ticket stall and near the food stall.
Katrina B thanked Liz K for her amazing efforts in co-ordinating Fair Day.

– Art Show Update Sarah W
Sarah W noted that the artworks are of a very high standard this year.
Sarah W asked class parents to promote the event among the parent body.
A jazz trio will be playing on opening night and tickets will be available at the door. The organisers would prefer, however, advance ticket sales so as to give them an indication of numbers attending. Tickets cost $15 and wine will be available by the glass. ($5 per glass)
The children’s artwork will be displayed in the staff room.
Judith D asked if there is any security on gate. Alex C advised that this had not been done in the past, as the event is fairly quiet.
Katrina B advised that the children’s artwork should be framed or on a canvas to facilitate hanging. They also need to be labelled with the child’s name and title (if they have one and should be approximately A4 size.

Funds Allocation Procedure Katrina B
The P&F Committee, in consultation with the school, prioritises items that require funding. Parent suggestions are also taken into consideration. These items are then brought to the attention of those at the P&F meetings at which time comments are taken. Approval is then sought from the parent representatives at the meeting.

Board Report/Executive Report Judith D
Judith advised that a Gap student will be arriving at the school shortly and notification will be placed in the next weekly note.
Approved school student numbers currently stand at 225. An application has been lodged with council to increase that number to between 320 and330. This allows 2 classes per year.

Future Building works include the administration wing and the COLA. An architect is currently looking into the most favourable site for the COLA (covered outdoor learning area).

Judith advised that risk assessment forms need to be filled in for Fair Day. Alex C will handle those.

There will be a Board of Governors stand at the Fair and members will respond to any enquiries from the community.

A site for the Gardening Club has been located outside the music room and will consist of octagonal raised beds. Alex D is fulfilling the risk assessment criteria. Two teachers will attend a workshop that informs and encourages schools to bring the healthy living concept into school. Grant money will be used to fund substitute teachers while they are away and also buy supplies for the club.

The large grevillea out the back of the school has died of natural causes.

Judith D asked for feedback about the possibility of Mike McDonald, a behaviour management consultant, coming to the school to give a talk to school parents. Meeting responded positively to this suggestion.

Teachers have taken on the supervision of the chess club.

Maintenance of Park on Corner of Cotentin Road and Wyatt Avenue
A letter (as advised in the minutes of last meeting) has been sent to council on behalf of the P&F Committee. Council has acknowledged receipt of letter and they will respond in due course.

Rehabilitation of Playground Within School Grounds Judith D
Judith D advised that any landscaping will be delayed until all building works (as advised above) are done so as to save on duplication of expenses As such, the timing of the rehabilitation of this site has not been set at this time.

P&F Email Contact Katrina B
A new email address for the P&F Committee will be created in the near future and included on the school’s website. In the mean time, all agenda items should be sent to P&F secretary Samantha Richards at her email address: schmeoward@optusnet.com.au.

Library Re-Opening Enquiry Judith D
Judith D advised that the library would not open before Fair Day. It is noted that the teachers are keen for access, so too the children. The headmaster will take further action to expedite the process. As such a definitive re-opening date is not available at this time. More shall be known before the next P&F meeting.

Fundraising BBQ at Bunning’s Katrina B and Alex C
A tentative date has been set for 23rd June 2013. This is the first weekend of school holidays. The previous BBQ’s have been run by the Chan family, but due to their departure from the school there is need of a volunteer to co-ordinate this event. There was a feeling among attendees that this timing may be difficult, being at the beginning of school holidays. Maria Mury will contact the Chans to ascertain whether the date was definite or tentative and other arrangements set in place. Alex C to communicate with Bunnings.

Notice of Extraordinary General Meeting of the P&F Committee Katrina B
Due to the resignation of Liz K as Vice President due to escalating work commitments there will an extraordinary meeting following the next P&F committee meeting to elect new office bearers.

Other Business
A query was raised as to the timing of fee notification. Judith D will follow this up with Board of Governors.

Meeting Closed
Katrina B closed the meeting at 9.00pm. 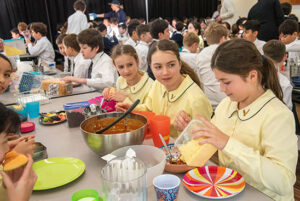 On the vegetarian lunch menu for Week 6